Parties & Rites of Passage: In Honor of Kaitlin & Peter

Posted on July 8, 2013 by David Blumenkrantz 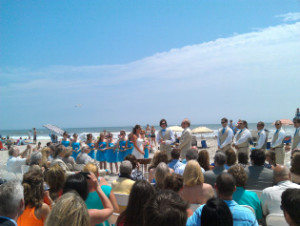 I like to have fun. Who doesn’t? Parties are a great way to have fun. There’s no better party for me than one celebrating some kind of transition. A rite of passage. No surprise. Yes, I’ve even been to some wild parties after a funeral! What can be more fun than to remember and celebrate the life of someone you loved and the importance of life itself? Even the Hebrew tradition of the Brit milah or Bris - circumcision - is an occasion for celebration and a party. Just don’t sit in the front row!

Last weekend I was at one of the best parties ever: The wedding of my dear friends Brian and Deborah’s daughter, Kaitlin, to a wonderful man we all love and call Peter Baby. It was on the Jersey shore, literally. The ceremony was held on a public beach outside a resort in Avalon. What started out as a cloudy, overcast day with showers threatening, turned into a glorious one with crystal blue skies and a sparkling sun. It was perfect.

Amidst the crowded beach a ceremonial altar was beautifully arranged with white chairs facing the ocean. Music filled the air as the wedding party emerged from behind the dunes and walked towards the Justice of the Peace. Here is where it got exciting. As the music changed to announce the processional the entire beach rose to watch the proceedings. Hundreds and hundreds of people in all manner of bathing attire and shades of pale gazed in wonder and delight. It only got better. Kaitlin’s brother, Ben, was the Justice of the Peace. As Kaitlin and Peter stood before Ben, excitement filled the air. The beach fell silent except for the sound of the surf crashing upon the shore.

“Welcome, dear family, friends and curious beach-goers,” Ben began to the enjoyment of everyone. I had a grin from ear to ear. With a hundred family and friends, plus hundreds more “curious beach-goers,” Kaitlin and Peter exchanged the vows they wrote. Ben officiated in the most outstanding manner I’ve ever seen, but the best was yet to come. And I’m not talking about the party.

As the wedding ritual came to a close and in anticipation of the traditional declaration from the official: “With the powers vested in me, I now pronounce you husband and wife,” Ben took a turn for the magnificent. He said something to the effect: “This is the traditional time when the official would pronounce the couple ‘husband and wife’. But, the union of two people, a wedding, a marriage, can only be complete when the community acknowledges and affirms that two people have come together. So, we’re going to do something different. At the count of three I invite all of our family, friends and curious beach-goers to say, ‘By the power vested in all of us, by our common love of Kaitlin and Peter We now pronounce you husband and wife.’ Here we go. One, Two Three.”

The entire beach erupted in unison: “We now pronounce you husband and wife.” It was an amazing example of a community witnessing, affirming, and proclaiming an individual’s change of status. Their joyous proclamation, in unison, helped to bring this sacred union into the Universe. And that’s the way it has always been in rites of passage. As I’ve written before,, “The work of initiation is mostly individual while responsibility for its transformative potential primarily belongs to the community.”1

Both Ben and Kaitlin and a number of the guests were alumni of the Rite Of Passage Experience© ROPE® over twenty years ago! It doesn’t get better than seeing those lessons about the importance of community take root and blossom years later.

I hope you all remembered and celebrated well another ritual event marking a major milestone – our country’s birth. Happy Celebrations to all and may all your parties and life be joyous and safe. Congratulation and best wishes to Kaitlin & Peter.  And, well done, Ben and the community!